Comprising some 140 works, Inner Worlds Outside explores the many myths surrounding Outsider artists, showing the parallels between Insider and Outsider art and the impact of some unknown Outsiders on the work of many of the greatest artists of the past 100 years. The exhibition is built around the Musgrave Kinley Outsider Art Collection, on loan to IMMA since 1998. It has already been shown to critical acclaim at Fundación ‘la Caixa’, Madrid, and the Whitechapel Gallery, London, both co-organisers, with IMMA, of the show.

Inner Worlds Outside takes its title from a phrase by poet Rainer Maria Rilke, who championed intuition over the rational and romanticism over classicism.

Since the early 20th-century, the terms Outsider Art and Art Brut have encouraged a problematic distinction between mainstream art and that created by artists with little or no knowledge of the wider art world. Inner Worlds Outside sets out to question this distinction by bringing together the work of such modern masters as Jean Dubuffet, James Ensor, Philip Guston and Joan Miró with that of a wide cross section of Outsiders, including Henry Darger, Madge Gill and Adolf Wölfli. The exhibition takes the view that Insiders and Outsiders form two sides of the same modernist tendency, frequently sharing a common discourse connecting the visual arts to social sciences.

The exhibition presents works in a wide variety of media and is arranged under five themes. Faces and Masks, for example, deals with the magical powers invested in representations of the face, in works such as Madge Gill’s obsessively intricate drawings and Paul Klee and Joan Miró’s treatment of the face as a heraldic sign. Imaginary Landscapes and Fantastic Cities shows the epic narratives by Henry Darger and the fantasy travels of Joseph Yoakum alongside equally vivid paintings by André Masson and Roland Penrose. The Allure of Language explores written language as a coded structure in the elaborate, imaginary maps of Adolf Wölfli and two pages of visually augmented writing by the Dublin-based Croatian Outsider Dusan Kusmic.

Outsider artists have included psychiatric patients, criminal offenders, self-taught visionaries and mediums and other so-called eccentrics.  Interest in their work increased considerably in the second half of the 1900s, with the growth of both modernism and psychiatry. Artists such as Paul Klee and Pablo Picasso frequently turned to Outsiders in search of a more spontaneous form of artistic expression, unadulterated by art historical knowledge, in contrast to what they considered an over-sophisticated and self-conscious mainstream. The French artist Jean Dubuffet was, perhaps, the most active proponent of Art Brut, building up a significant collection of Outsider Art. However, many leading authorities today question the extent to which he sought to set their work apart from the wider art world.

Writer, filmmaker and gallerist Victor Musgrave, founder of the Musgrave Kinley Outsider Art Collection, was a member of Dubuffet’s compagnie de l’Art Brut and in 1979 organised the legendary Outsiders exhibition at the Hayward Gallery in London. The success of the exhibition encouraged him to establish the Outsiders Archive and to build a collection that would be accessible to the public. Since his death in 1984, his companion, Monika Kinley, has continued to add to the collection, which in 1998 was given on loan to the Irish Museum of Modern Art. Since that date IMMA has staged four exhibitions based on the collection and has also shown Outsider works in many general exhibitions from the IMMA Collection, at the Museum itself and throughout Ireland as part of the IMMA’s National Programme. In 2005 a small exhibition was held at Tate Britain to mark the publication of Monika’s Story – A Personal History of the Musgrave Kinley Outsider Collection and the donation of the Musgrave Kinley Outsider Collection Archive to the Tate Archive.

Inner Worlds Outside is co-curated by the distinguished academic and critic Jon Thompson and Monika Kinley.

A fully illustrated colour catalogue, with texts in both English and Spanish  accompanies the exhibition. It includes a joint introduction by Enrique Juncosa, José Conrado de Villalonga and Iwona Blazwick, directors of the organising institutions, as well as essays by Professor Roger Cardinal, art historians James Elkins and Ángel González Garcia and Jon Thompson 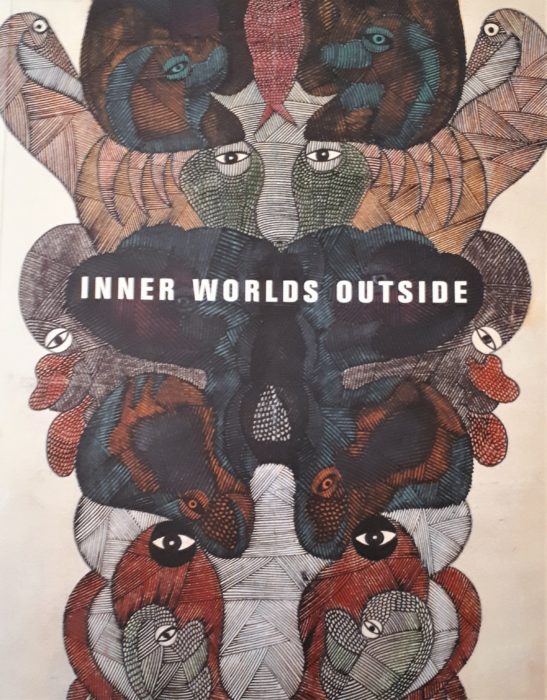